With autumn at our doorstep, we are drawn outside to soak up the last rays of sun and to stimulate our senses with the season’s beautiful colours and aromas. The Lake Temiskaming region is an ideal place to enjoy fall. South of the lake, there is a a mixed-maple forest with a full range of gorgeous colours to admire and photograph. North of the lake, there is the Little Claybelt region, with its many farms and fields which are rich with the colours of the harvest. Explore the Lake Temiskaming area in the fall and be delighted by a serendipitous experience!

Trails in the Area

In the fall of 2015, blogger Jane Canapini was asked by Northeastern Ontario Tourism to identify the top five hiking trails in Northeastern Ontario. Three of these top five trails are in the Lake Temiskaming Tour region. Québec also offers many excellent trails that are vibrant in the Fall.

The Duchesnay Falls Trail is considered a medium difficulty trail. It covers a 3-kilometre loop. The trail begins with a series of waterfalls leading to the river. It suddenly splits into two channels, each forming a series of falls where hikers can venture. Be careful—the rocky path can become slippery when wet and there is no fence near the falls. The location also is a delight for amateur photographers all year round.

In Temagami, 100 kilometres north of North Bay, the Caribou Mountain and White Bear Forest Conservation Reserve offers eight trails. Hikers have a unique opportunity to cross a virgin forest, where no mining or forestry has ever been established. Its ecosystem of flora and fauna are unique to ancient forests. There are trees whose age varies between 150 and 350 years. This forest is the ancestral home of the White Bear Family, an indigenous tribe of the Temagami First Nation. The footpath of the same name, "White Bear Trail," leads to a forest fire tower. With a difficulty level of "easy", the trail is 3 kilometres and can be completed in about two hours. From the top of the tower, visitors have a 360-degree panoramic view of the ancient forest of Temagami’s network of lakes. 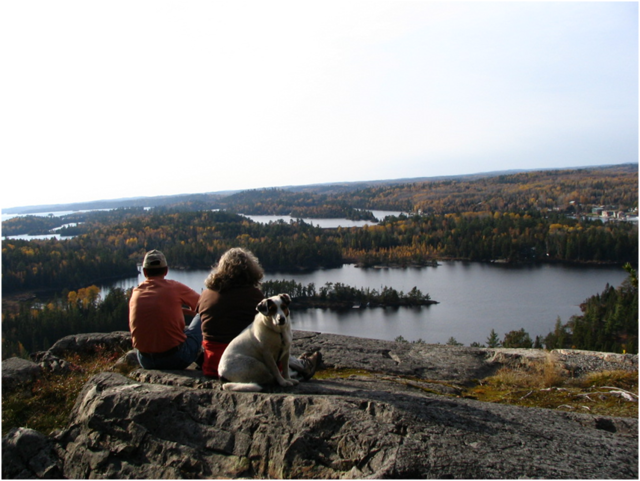 The Devil's Rock Trail is on the west side of Lake Temiskaming, 5 kilometres from Haileybury. When you reach the end of the path, it is not only the height of the steep cliff that is breathtaking, but also the spectacular panoramic view of Lake Temiskaming on three directions. It’s an overwhelming feeling to be overlooking a lake and region, seeing no civilization, and imagining what the First Nations would have seen 1000 years ago. Considered a medium-difficulty trail because of the uneven terrain, Devil's Rock is easily accessible by a short drive on Highway 567 followed by a 20-minute walk to the cliff. If you want a more challenging hike, Devil's Rock is also accessible by a 3-kilometre climb from Bucke Park, a nearby campground. 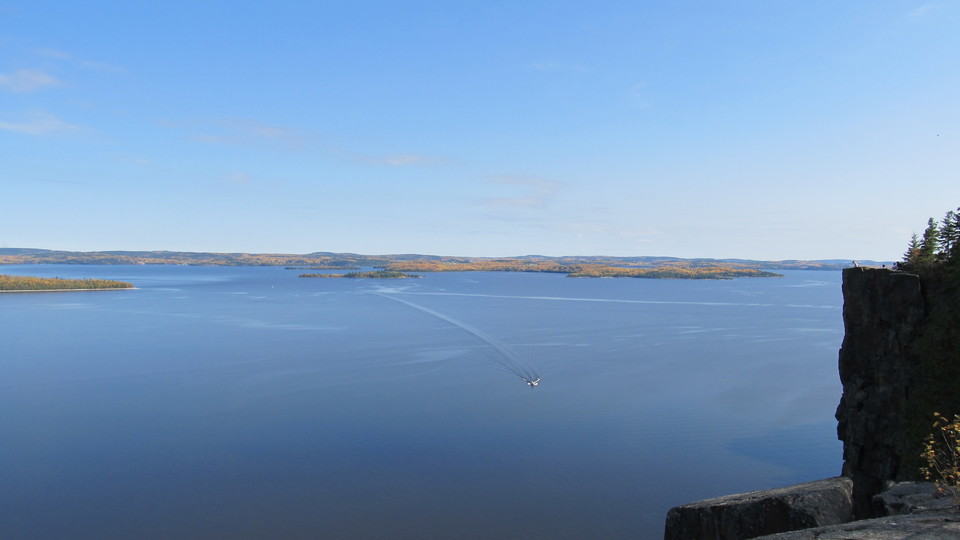 Fed by Lake Kipawa, Gordon Creek crosses through part of the Town of Temiscaming before flowing into the Ottawa River. You can reach Gordon Falls by taking the bike path and continuing along the hiking trail. At the end of the trail, a lookout offers a wonderful view of downtown and of the Ottawa River. The landscape is marvellous in the fall.

Are looking for a safe hiking trail during hunting season? The Récré-eau des Quinze hiking trails offer a safe variety of trails (1.9 km, 2 km, 3.3 km, 3.4 km and 3.5 km) located between Notre-Dame-du-Nord and Angliers. Panoramic views of the islands of the Quinze River await you. In addition, you’ll find many natural attractions along the route, including rock shelters, moss, lichen, and giant potholes.

Autumn is the perfect season to walk in an orchard. Located in Nédélec, “Centre Becs et Jardins” is a one-kilometre-long trail that goes through fruit trees, wetlands, rock gardens, and a barnyard with multi-coloured pheasants.

For those who want to enjoy the fall colours without having to hike, we suggest you take the Chief Commanda’s Fall Cruise in North Bay. This two-hour cruise starts from the marina in North Bay and along the north side of Lake Nipissing to admire the magnificent colours. Be sure to check their website for dates and times of cruise departures. 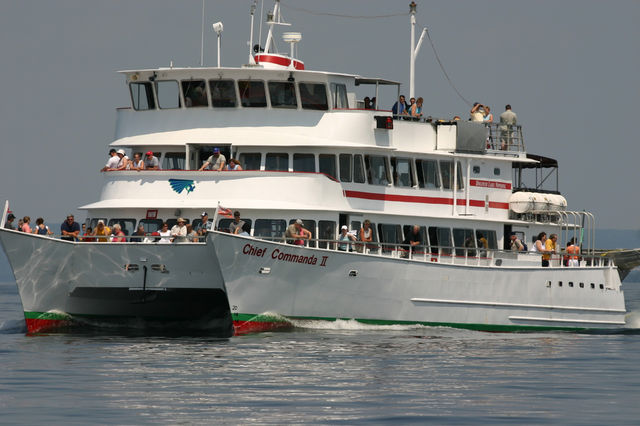 The migration of birds in the fall is an incredible phenomenon in this region, particularly that of the geese that follow Lake Temiskaming. Hilliardton Marsh, an important wetland for migratory birds, offers a unique owl banding activity on Wednesdays and Saturdays at 8 P.M. from September 23 until the end of Thanksgiving week. Every night, an average of two dozen saw-whet owls are caught for banding. Visitors have the opportunity to touch this unique little bird and learn everything about it.

In 1879, Father Moffet began cultivating the soil of Témiscamingue, despite having been instructed otherwise by his superior. His perseverance earned him the title of “The Father of Agriculture” in Témiscamingue.

On the Ontario side, the Agricultural Research Centre in New Liskeard opened in 1922 to help farmers adapt their crops and livestock to the climate and terrain of the North.

In Notre-Dame-du-Nord, a university research centre conducts scientific studies on the Nordic beef, which are exclusively grass-fed.

Today, the Temiskaming region, known for its small yet rich claybelt, contributes to Canada’s agriculture thanks to these early visionaries.

Annually, Fall Fairs are a time of year when the hard labour of these farmers is shared with the community. These events are part of the culture of these lakeside communities.

One of the most important Fall Fairs of the region is the New Liskeard Fall Fair, held on the shores of Lake Temiskaming, which began more than 110 years ago. The Harvest Queen competition, street parades, equestrian competitions, exhibitions of crops, animal displays, craft kiosks, barn tours, and midway rides attract thousands of people on the third weekend in September.

For those who prefer to visit the farms firsthand, there are several opportunities. Every year in Québec, the Union of Agricultural Producers (UPA) organizes visits to local farms during the open-door events in early September. Thousands of people travel from all around the province and country to learn about the equipment and methods used in modern agriculture. Each year in Témiscamingue, at least one farm participates in this popular tourist activity. Visit the UPA website to see the farms that will be participating this year.

In the Temiskaming region, an annual Plowing Match has been held every September since 1999, thanks to André Saintonge’s vision and dedication. The traditional plowing competition includes the Queen of the Furrow pageant and activities for children. It alternates between different farms in the region every year.

Autumn is also the time for pumpkins. In Temiskaming Ontario, Craig Haven Farm offers pick-your-own-pumpkins, which is always a great family activity. In the Nipissing area, Leisure Farms offer the pumpkin patch as well as corn and hay mazes, a haunted barn, a playground, and rides in carts, every weekend in the fall until the end of October.

This time of year is also when ghosts appear! The Discovery North Bay Museum in North Bay organizes a haunted walk downtown every Friday in October starting at 6:30 p.m. You will discover the ghost of North Bay’s train station, which was built in 1903, and several others who have been walking the halls of the buildings in downtown North Bay since the early 1920s. If you enjoy spooky stories, call the museum to reserve your spot.

This unique race is held on the last Sunday in October in Temiskaming Shores, along Lake Temiskaming. You can choose from a 5-kilometre run, 10-kilometre run, half marathon or full marathon (which is a qualifier for the Boston Marathon). Participants dress up in Halloween costumes, which makes the race quite entertaining for runners and spectators. The funds generated by this activity go towards the further development of the STATO trail, which connects the communities of New Liskeard, Haileybury and North Cobalt. 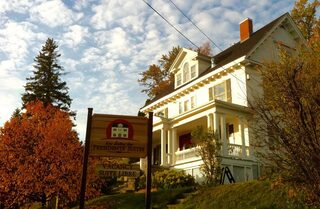 P.O. Box 1380 620 Lakeshore, Haileybury, Ontario  P0J1K0
When you are staying at the Presidents' Suites, we will tailor your stay so that you can incorporate fall activities into your experience in our beautiful lake Temiskaming region. Fall has a lot to offer and we can help you discover this beautiful season. Discuss… 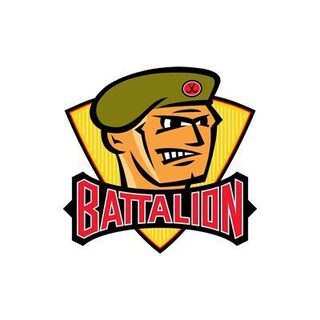 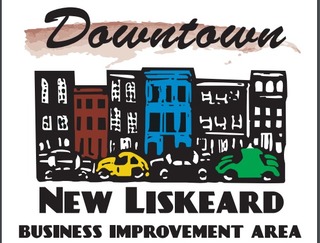 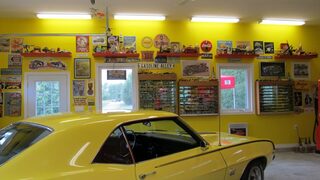 583250 West Rd, Haileybury, Ontario  P0J1K0
A collection of over 4000 miniature cars depicting the history of the automobile from the beginning of petrol engines to cars of today. Movie cars and cars from days gone by. 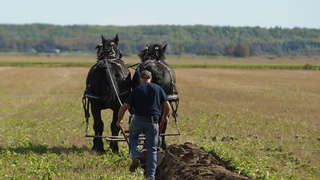 P.0.Box 231, Earlton, Ontario  P0J 1E0
Since 1998, Temiskaming offers its yearly plowing match. Ploughmen demonstrated and share their passion through a friendly competition. With horses, old tractors they are proud to show their knowledge to youth and citizens. All can see the evolution of the…